Republicans often use the framing of “big government” as a strategy to derail public support for a proposed social policy. This framing tends to work. On average, Americans are much more likely to be concerned about individual freedoms, with limited interference by government, while many Europeans believe in government playing an active role to ensure that nobody is in need. This distinction in values is largely why America stands out among other developed countries as the one nation that does not provide universal health care for its citizens. Not surprisingly, we have heard this framing of big government and “government takeover” time and time again from opponents of the Affordable Care Act (ACA). However, if you know anything about how the ACA (AKA, Obamacare) works, it is certainly not akin to “socialized medicine.”

When we think about the role of government we can think about government as regulator and government as funder. In this way, the ACA did expand the role of government in health care. Today, we are going to focus on the Medicaid Expansion—one aspect of the ACA that embedded new federal regulations and money—a whole lot of federal money—as a means to expand health care coverage for the poor. Interestingly, this also happens to be one of the components of the ACA that many governors (even some Republicans) are concerned about losing.

From Categorical to Universal

The intention of the Medicaid expansion was to provide a guaranteed level of health coverage for the poor, and to create the building blocks of affordable health care coverage. To better understand why this was necessary, let’s start with a bit of background on the Medicaid program. Medicaid was established in 1965 along with Medicare (Parts A and B) to provide a health care safety net for low-income people, but only for those who fell into certain categories. This historical categorical eligibility meant that you needed to both belong to a specific category, such as children, pregnant women, parents, individuals with disabilities, and the elderly, and also meet income tests based on state-specific eligibility, within federal guidelines. For many years if you had little to no income, lacked access to employer sponsored insurance, but did not fit into one of these categories, you were very likely to be uninsured.

As part of the ACA, the Medicaid expansion set out to solve some of the so-called “swiss-cheese holes” problems in health care coverage—in other words, build on existing systems and fill in critical gaps for those historically left out. The Medicaid expansion set income-based eligibility for Medicaid to 138% of the federal poverty level (or $27,821 for a family of three) without any categorical requirement—establishing a true income-based health insurance safety net. Well, at least for those who lived in states that expanded Medicaid.

Intended by the authors of the ACA to be a mandatory provision, the Supreme Court ruled in 2012 that the Medicaid expansion was unconstitutionally coercive of states. While the federal government can have strings attached to money it provides to the states, in the case of the Medicaid expansion, the premise was that if states did not expand Medicaid they could lose all of their federal Medicaid money. On this issue, seven justices agreed that this was unconstitutionally coercive because it did not enable states to make a “genuine choice” about accepting the money based on these new conditions, since federal Medicaid money was already flowing. The majority opinion resolved this by saying the federal government could offer these funds to the state, ultimately making it optional for states to implement the Medicaid expansion. To date, 31 states plus DC have expanded Medicaid. 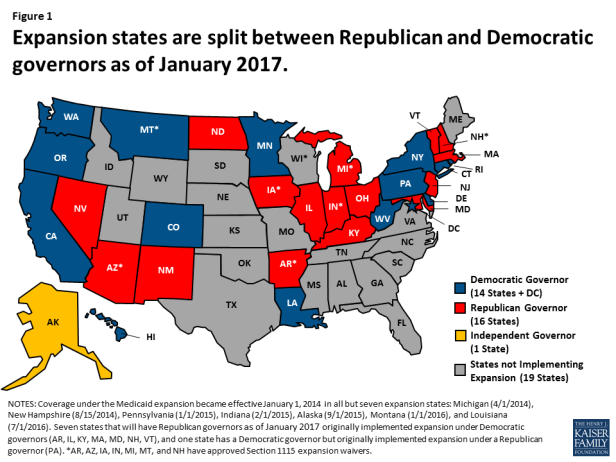 In states that did not expand Medicaid, eligibility levels for childless adults and parents remains limited, with an average eligibility level for parents equal to 44 percent of poverty (or $8,870 for a family of three). Recent estimates suggest that through the end of 2015 nearly 11 million people obtained Medicaid as newly eligible enrollees in the expansion group. (For a state by state estimate of how many people could be covered if Medicaid expansion were universal, visit Kaiser’s analysis of the remaining uninsured).

With Medicaid expansion, states receive an enhanced FMAP, regardless of per capita income. Specifically, the federal government provided an FMAP of 100 percent between 2014 and 2016, decreasing to 90 percent by 2020. That means in 2020 and beyond, for this expansion population, each state dollar would be matched with nine dollars from the federal government.

Even Red States Want to Keep the Money